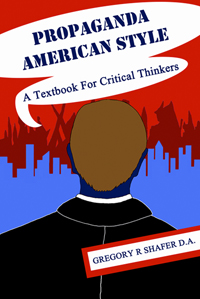 Propaganda – American Style: A Textbook for Critical Thinkers by Dr. Gregory Shafer. Read an excerpt from the first chapter:

To most Americans, propaganda is something that is done by other nations to other people. We think of communist propaganda, Nazi propaganda, or even European propaganda. Rarely, in our egocentric world, are we cognizant of the insidious and yet very vivid examples of propaganda American style. Why? Because we have been conditioned to believe that we live in a land of freedom and democracy – a place that is devoid of manipulation and mind control.

The world of George Orwell's 1984 is interesting to us but only in its ability to reveal other worlds, where nefarious leaders use psychological strategies and deceptive language to control the actions of their citizens. Unfortunately, careful observation shows us that propaganda is very much a part of the American scene and is used frequently to dupe Americans into thinking and believing ideas that are not in their best interests.
We have always suspected that politicians lie, but rarely do we consider the ways that they use language and images to persuade us to act in ways that benefit them while undermining our own lives. This is the essence of propaganda, and it is essential to our democracy that we learn its nuances so as to combat its attenuating effects.

How does it work? FIrst, it is important to understand that propaganda is like an invisible gas that permeates a room and slowly, inconspicuously intoxicates its victims. Leaders who use it are adept at spreading it without recognition of what it is. To do this, it must be packaged to look like something else. It must appear in a form that seems innocuous and even friendly.

Propaganda appears in the form of music, movies, posters, and television comedies. It is part of the language we hear each day and is often disseminated in popular songs. It is often part of the so-called "objective" analysis one hears on Sunday news programs and is distributed to the populous in prime-time TV that romanticizes the American way while vilifying anyone or anything that opposes American policy.