"A DOG'S LIFE" BY GREGORY SHAFER 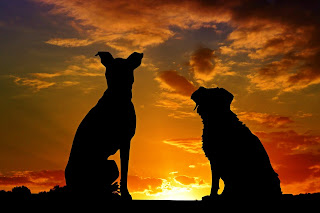 Tuesday was a lot like Monday. Dilley rose early and got herself together, licking and grooming herself as she has seen others do before her.
Murphy was still fast asleep, snoring loudly, occasionally slurping around some dog spit and coughing and hacking in his very special way.

It had been just a year, but Dilley was learning the ways of the world and had aspirations to do great things. A squirrel? It was possible. A raccoon? Why not? A very large one had been rumored to be roaming the streets of her neighborhood and had inspired some brave talk from Flipper two doors down.

Flipper. . . What kind of twisted individual named their dog after a fish? And the dog seemed completely oblivious to the ridicule, to the derisive talk among other canines in the neighborhood, the ridiculous names that included “Fish Breath” and “Fin Head.” How does one fight raccoons with such a moniker around one’s neck?

Dilley chuckled quietly and licked herself. Dilley was certainly young, and Murphy was the first to remind her of her naïve ways, but the desire to make a difference couldn’t be controlled. It was always there, resonating inside of her.

She had heard the stories. She had been schooled in the ways of the great ones. In ‘04 the legendary Goober, a cocker spaniel of questionable pedigree, had breached the confines of an invisible electronic fence to save Sally from the imminent danger of an oncoming car.
In 08, Murphy, the veteran who ate first and dispensed advice like a field general, had stood toe to toe with an ill-tempered and rather boorish wolverine, ordering him off of the property with barks that still animated talk throughout the county.

Dilley took a deep breath, knowing that something special would happen today to her, that she would make a name for herself, perhaps earn the praise of Murphy, the veteran, the individual who had been the target of constant praise from house members. A slight chill of excitement ran through Dilley, causing her to turn over and lick herself again.

“Want to go potty?” That was coming from the main bed of Sam, and Dilley wondered when they would be able to graduate to a more dignified way of relieving themselves.

The entire term was insulting, degrading. How about a nice euphemism concerning a visit to the front yard or perhaps they could avoid the subject altogether by couching it in a discussion about watchdog duties? Were they meant to be forever treated like kids? Dilley was already about 10 years old in dog years and wished a certain somebody in the big bed could get that through his thick head.

But such thoughts quickly dissipated as the march to the back yard commenced. Murphy insisted on going first, always waiting a few precious seconds in front of the slider so as to get a feel for the setting.

“A little caution can go a long way in keeping you from the grim reaper, Kid,” Murphy said to her when she asked why he was waiting.

“You’ll understand in time,” he added.

Just keep listening and keep your butt clean.” Dilley had followed that sage wisdom with what she thought was an affectionate lick to Murphy’s ear and eyes, especially since there was an annoying ball of sleep in Murphy’s eyes.

“Don’t ever lick me there,” Murphy commanded.

“Have to wait till you’re a little older,” Murphy replied with a friendly wag of the tail. “It’s not talk for a dog your age.”

Murphy heard none of it, since he had waited his required time and was now bounding off toward a meandering squirrel that had taunted him since, well, since Dilley had arrived at the premises.

Murphy’s expressions of imminent doom were legendary and he peppered every chase of this classic dog-squirrel chase with memorably grand bravado. It always ended the same way.

“If I were ten again, he’d be in my mouth right now. What are you looking at? Catching squirrels is tough. They’re fast and can do zig-zags that are beyond your young years, Kid.”

Dilly wanted to remind Murphy that she was actually a girl and didn’t especially like being called “Kid.” But this was a time to learn. Her tail was high and taught, indicating respect and attention.

“Don’t lick me. Don’t EVER lick me after a bad chase. Mostly I want to be left alone and ruminate, but sometimes I’ll dispense some words of wisdom. Keep those ears clean and alert. You’re gifted with some pretty sophisticated auditory skills. They’re secondary only to your olfactory senses. You getting all of this?”

Dilley was paralyzed. Murphy was talking SO fast and all of those people-words that were SO far beyond anything she could ever imagine saying.

Murphy was off again before she could finish her sentence or ask about new words. Suddenly she was accosted by the mutt next door They called him Slim, which seemed another cruel joke since he was overweight and had unsightly flakes sprinkled throughout his hair. On top of that, he was annoying. Even Dilley knew that word.

“There aren’t ANY wolverines in Michigan—not ANY.”

“So, how did your great hero Murphy fight off a wolverine when there aren’t any?”

What? For a moment the world stood still. This was big and ugly and was the worst thing ever contemplated since maybe that thing on the news about ticks and lyme disease.

Slim wagged his tale with arrogance Dilley could hardly stand.

"No wolverines…So how does Murphy explain this story about protecting the family from an animal that doesn't exist?"

Dilley felt her tale go limp. Before she could utter a response she was further humiliated.

“Dilley, are you finished going potty?”

"Going potty…What are you less than a dog year?" Slim laughed as Dilley trotted toward the house.

NO, the fact is, I'm almost sixteen in dog years, and you're fat and flakey…"

Slim had uttered a retort but the slider had closed, allowing Dilley to be protected from any further humiliation.

Suddenly the world was a much different place. Could it be true that the whole tale was nothing but more lies, like the idea that going to the vet was fun or that being kenneled was going to “doggy camp?”

Dilley looked long and hard at her older, venerated brother. He was at his usual spot, licking himself and scratching sensitive spots.

“Why are you staring at me, Kid” Murphy said as he finished grooming and smiled. “Want to hear a tale about the time I wrestled a cougar? It had made the mistake of venturing into the yard, see, and I was, oh maybe a little younger than you and, well, . . .”

Dilley found herself mesmerized, comforted by Murphy’s warm, deep voice, the confidence in his timber. She cuddled close to her big brother and gave him a quick lick in his ear.

“Wow,” you snuck that one in on me, but it’s okay cause, well, I love you, Kid. You’re the future, the next generation.”

Moments later, Murphy was fast asleep, snoring as loudly as Dilley had ever heard. Murphy slept a lot—more every day-- and was noticeably slower than when Dilley had first come to the house.

Dilley knew he would never catch another squirrel. As she snuggled a little closer to his snarly and gnarled old body, Dilley thought long and hard about the latest revelation and resolved to NEVER mention the truth about there being no wolverines in Michigan.
It was something that was better left alone. It was part of growing up.
###