"The Date" by Gregory Shafer 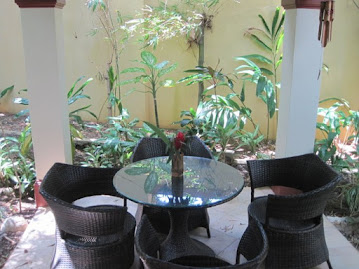 It was half-past eight and Sally was still not there. Ben rechecked his watch and glanced briefly at the napkins, glasses, and dishes.

It was a grand scene and the green plants that surrounded the glass table and wicker chairs created a feel of natural beauty and elegance—one that reminded him of Sally.

It had been thirty years, two divorces, and several effusive emails to get to this point, and now he was waiting for the woman who had filled his fantasies for so many years.

"High school was different," he thought to himself. "People grow. I'm not a nerd. I'm insanely successful. Who else could afford this private dining for two?"

Ben smiled and buttoned and unbuttoned his shirt.

This time, Sally would be his.

A slight knock at the door stirred Ben from his revelry. Immediately he felt his heart palpitate as he breathed deeply and rose from the table.

"No, that's dumb. That's rude. I wonder if the chicken is a bad idea. Maybe she's vegetarian."

Ben opened the door to find his high school dream waiting. The years had been good to the fifty year old. Her hair was still dark black, despite the strands of gray that mingled with her natural color. Her eyes were opulent brown he had remembered but were tinged with decades of worry, concern, kids, and mostly life.

Still, the smile that quickly covered her face was genuine and emanated a sweetness that reminded Ben that youthful energy is always possible when love is in the air.

"Ben, you look wonderful. Is this crazy or what? Thirty years and here we are."

Ben took another deep breath and turned to welcome Sally into the dining area. She had remembered his name!

"I have taken the liberty to rent this entire residence for our special evening together. If you will, my dear, we will be dining in the patio area to the left. Follow me."

As they walked together, Ben felt a surge of confidence flow through him. Sally grabbed his sweaty hand and he guided her to the table, where his professional service had already displayed the food and drinks. The table was small but the plates were filled with food, and the wine glasses promised several toasts.

"May I help you to your seat?" asked Ben as he held Sally's chair and quickly pushed her close to the table.

As Ben sat down across from Sally, he finally realized the time had come. So much had passed. Two wives, numerous heartaches, kids that hated him, but there was always—in the back of his mind—the life he had lost, the better life he could have had with Sally—the most popular girl at Western High School.

"You know," said Ben as he smiled widely, "I have thought of you often over the years. You were so special to me. And yet, I always felt like something was taken from me—a chance to meet you and show you my potential."

Sally slowly shook her head in perfunctory agreement, as if contemplating a mathematical problem she could never hope to solve. Ben had expected a bit more enthusiasm, but as the silence lingered, he realized, Sally had nothing to say.

"What have you been doing with yourself?" asked Ben trying to reinvigorate the conversation. "You were always so smart, so bright—top of your class if I remember correctly. Whatever happened to the Daisy Buchanan of Western High?"

Sally was buttering a roll and seemed again caught off guard.

"I, hmm, I have been searching for a few years, Ben. My husband abused me, hurt me physically and emotionally for so long. When I finally had the chance to escape, it seemed like a new life. And then I realized I had no skills, no education, no real prospects. Who wants to hire a mom and housewife, especially one who has been broken for so many years?"

Sally put the roll back on her plate and closed her eyes.

"I—I guess I'm not what you expected, am I?" Another silence lingered in the air, and suddenly the atmosphere seemed heavy and wet.

"I—I'm so surprised. And, I'm, I'm so sorry. I remember you so differently. The grades, the sports, the beautiful dresses. Sally, you were my fantasy, my elusive dream."

Ben stopped for a moment, walked over to Sally and dried her tears. The tissue was quickly saturated and Ben reached for another, running his hand over Sally's arm.

"It's okay. Please, you're going to be fine." His plans to overwhelm her with stories of his law school triumphs and courtroom victories had evaporated with the hope to console her.

"I want to just eat and relax. I want you to know that I am so happy you are here. You will always be the sweet person I knew in high school. That will never change."

And with that declaration, they began to eat. There were moments of laughter and stories of furtive glances at the girl who was totally beyond Ben's reach.

Within minutes of the completion of the first course, Ben had helped Sally remember what she was so many years ago. The smiles each shared were real and filled with the elixir one feels when relishing youth's power and beauty.

You were the girl every guy fantasized about, Sally. And none of us had the nerve to even talk to you. How did that feel?" asked Ben as they completed the dessert.

Again Sally smiled. It had been a long time since she had laughed—years since she felt the admiration of a man, decades since she was important, relevant, loved.

And as she lay in bed later that night, she remembered nothing of the food or Ben's silk tie. For a precious moment, she had sipped from the well of youthful memories—and she was happy.