"Sometimes At Night—Songs" by Gregory Shafer 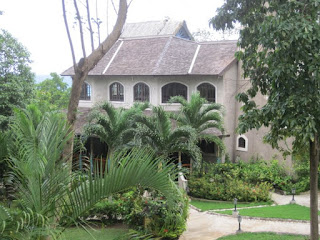 Sometimes at night, when the wind is rustling through the trees and the slaves had quieted from their evening of listless desperation, the stones of the old plantation home would cry and creak.

It wasn't audible to any neophyte, but for those who lived in the South and knew their way around cotton and sugar, long ropes, and sweaty overseers, the moaning of the wood and stones was agonizing and stark. Truth be told, it was a language, a searing shrill of desperation and pain that was understood by all.

You see, slavery is an edifice, a mammoth monolith of lies and deception. It is packed into buildings like the old plantation house, but its deepest, most terrifying secrets cannot be contained.
Oh sure, there are ways to hide the sin. There are magnolia tres that emit a sweet morning smell and caress your body when you are swimming near its roots. And the flowers are so effervescent, so sweet and tranquil. What a splendid facade for communal suffering and turmoil. Slave owners love old magnolias because in their flowing waves of leaves and branches there is a respite, a short moment of relief from the poignant cry.

All of those plants. Were they hoping to shield the home from the grief that surrounds it?

Whatever the answer, the bushes and trees and the flowers that grow tall and strong, create a colorful tapestry. And yet, at night—and sometimes during the day—the sobbing from the stones is so horrifying that Old Master Ripley emerges from his drink and talks to the overseer, telling him to make those slaves work harder.

“No more singing from that old man,” he said referring to Sammy, who tried to drown out the cry of darkness emanating from the house with his songs of freedom

“Shut that boy up before I whip him,” said Master Ripley as he marched angerly back, damned to hear the song from the house—one that tells him that he cannot escape the contempt of his life.

One night it got bad. It happened after the work was over, and Sammy, who sang even when he ate, was slashed by one of the young slaves. The whine of the old house was suddenly overcome with the screams of a man as it comingled with red blood and regret.

Old Ripley was inside, chewing on old meat and scrambling around the dusty floor, trying to make the songs of the house stop when he first heard it in the distance. Then, as it became louder, he needed to see to it. Sammy was drowning in blood, red liquid that saturated his sweaty shirt and soaked into his wizzled beard.

Ripley had him brought into the main house and placed on the old rug, since he wasn’t about to get some new rugs stained from slave blood.

“Boy, what happened to you?” asked Ripley, finding the subdued moans better than the voices of the house.

Sammy was used to being silent when Master was around, so he chewed on the sleave of his shirt, absorbing the pain and tasting his own blood.

“Boy, I called the doctor, but you need to tell me who done this to you, cause I ain’t about to let some pudding head deprive me of work.”

Sammy breathed deeply and looked up, noticing the candles and the dark wood that surrounded the room and always spoke to him when he delivered messages from the town.

A slave doesn’t fear the cries of an old plantation house, because for him, they speak of retribution and serenity. They commune with magnolias and oaks and the ivy that covers the house, conspiring to create a kind of opus of hope.

Whispering willows really do whisper, you know, but the message is different for each person.

Finally he summoned the strength to answer Old Ripley. ”Whitmore slashed me. He don’t like my singing. He wants it quiet and dark—like you.”

Ripley winced at the idea of being compared to a slave, but he knew Whitmore. He was young and belligerent and mostly just angry all of the time. He had him brought to the house for punishment, forgetting that Sammy was going to die in front of him.

Punishment must be meted out, and it was good that he did it while Sammy’s blood was still hot and running all over his carpet.

Once Whitmore entered, the dark room became darker and heavier with hate. Old Ripley and Whitmore—and the old house, singing a song of death and venom. For a long moment they stood face to face and poured waves of poison over each other’s heads.

“Boy, this old man was my best slave. Put in long hours, and I never cared about that singing cause it was better than the house and its screaming noise. Now, he’s dying cause of your ignorance and sin. You must be punished.”

Ripley went to the old closet next to the cupboard and pulled out the whip. It was a gnarled old instrument and the dried blood never made it seem no worse for wear.

“I’m gonna whip you right here in front of your victim,” said Ripley as he ordered Whitmore’s shirt removed.

Suddenly, a whispering song came quietly and then louder from Sammy’s sweaty face. His eyes closed and his heart barely beating, where did he conjure up the strength to sing?

First softly and then louder. Whitmore turned and gazed. Ripley’s eyes widened. After minutes that seemed like eternity, Sammy gasped and sang no more. The blood, the sweat, the soaked shirt of dirt and blood and lost dreams all quiet for the first time that anyone could remember.

Finally, Ripley turned to Whitmore and raised the whip. Suddenly he stopped and froze. In the distance, louder than he had ever remembered, the old house was moaning and singing Sammy’s familiar song.