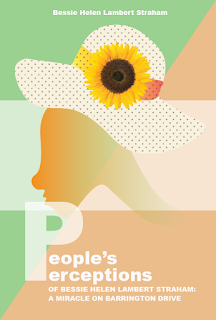 Bessie Helen Lambert Straham was having a conversation one day with a friend who was a professor at a community college. Straham's friend was telling her about the different topics she assigned for composition courses. And, there was one particular topic in which she received some very interesting responses from her students: "How do you want to be remembered after you die?"

Straham also found it interesting because she had been pondering that same question: “What would people remember about me when I passed?”

Straham felt she had a pretty good sense of herself. After all, she spent years as an educator, a church member, a political activist, and a 50-year-member of the Delta Sigma Theta Sorority, Inc. Yet, Straham wondered if the perception she had of herself was the same one that other people had of her.

So, she set out to explore this issue in her memoir, People’s Perception of Bessie Helen Lambert Straham: A Miracle on Barrington Drive.

“Instead of waiting for my final exit, I decided that my memoir would ask and receive the answers while I am still alive and kicking,” Straham wrote in the book’s Prologue. “And so, this publication is a compilation of special persons’ perceptions with whom I have had contact throughout the years.”

Straham said those who know her well know that she deeply loves the Lord, loves to dress well and loves to wear hats. Once someone complimented Straham on her beautiful hat, and Straham said that she would give the hat and others to her sorority chapter, Flint Alumnae Chapter of Delta Sigma Theta Sorority, Inc., for the chapter to sell at a nominal fee for its scholarship fund.

Straham's memoir explores people's perception of her in several areas, such as facing grief, her love of family, friendships, and her professionalism.

Readers will notice that most sections of her book are prefaced by an image of a hat and words from the “Great Holy Book.” “This is my way of showing I am a person of the world and of the Holy Spirit,” she wrote.

People’s Perception of Bessie Helen Lambert Straham: A Miracle on Barrington Drive is a different kind of memoir and is especially relevant to those who want the same question answered as the author.

To preview the book, go here to visit the book’s webpage on the MarketingNewAuthor’s site.