"Table For Two" by Bernadette Gongora 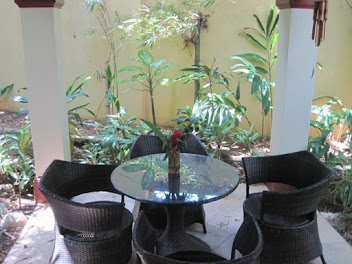 She felt the warm beads of perspiration lazily roll down her back, making her blue silk blouse stick like a diving suit.

As she opened the red tropical style door, she immediately welcomed the icy cool of air.

“Ah,” she said not even noticing it came from her.

The clickety-clack from her stilettos hit the gray ceramic tile floor, reminding Tom of the Spanish dancers Margarita took him to on their second date to watch Flamenco dancers perform with cassinettes and all.

Margarita paused for a moment and nonchalantly, said, “Oh, really—a surprise for me?” Trying to buy some time as she revised all the momentous dates, a calendar spinning through her brain. Was it a birthday an anniversary?

Tom greeted her by the gleaming white kitchen escorting her to the patio where the descending sun was peeking through the gnarly majestic banyan trees.

“Okay, let me blindfold you; it’s a surprise,” said Tom.

Margarita thought hmm-this is interesting. Did we reading Fifty Shades of Grey, stick in his head? Maybe he was pretending to be asleep while I read it.

“Ay, caramba! That hurts,” she said. “Oh, wow,” she forced a smile imagining the surprise to be more decadent.

“Aren’t you happy? I saw this and knew it would work here,” said Tom so proud of himself. He examined Margarita’s face for signs of life—approval he’d hope.

It was a challenging transition moving his whole life from the Midwest to South Florida, Miami. Friends and family warned him; it’s a different world down there. Jim, his childhood friend told him to think Banana Republic, and warned him he wasn’t going to be in Kansas anymore.

Margarita or Daisy as she liked to be called, kicked off her high heels; one flew toward the foyer and missed Tom’s eyes by inches. She ran to open the front door, calmly peeked out to examine all the neighbors’ front porches, and gasped.

“Ay carajo,” she said under her breath. Daisy composed herself, walked in the house, and asked her husband, “Where did you buy that patio set and when did you get it?”

“Oh, I got it today. I saw it and knew it would go beautifully on the patio. Don’t you like it?” he asked innocently.

"Honey—did you grab that set from their curb that was put out for garbage?”

“Yup, I can’t believe that they would throw out such a good patio set. The chairs are in terrific condition and the glass top has a few nicks on it, but we could replace it, and it’d be good as new. Didn’t you say you loved it when we were last there for martini night?”

He unknowingly revealed the truth.

“Uh, hmm, yeah,” she muttered. She was spent from a long day at work and didn’t have the energy to soften her displeasure and just came out and said, “Tom, you can’t go around plundering our neighbors’ trash. What would people say? This is not Indiana where we scavenge through our friends’ refuse and rename it trash to treasure. In Miami, people don’t have garage sales. When have you driven around Miami and seen  a garage sale?” Daisy asked sarcastically.

“Maybe people should. They have perfectly good stuff they throw out. I could make a pretty penny on what I see on the curb. Am I right?” Tom questioned her defiantly.

“Did anyone see you drag in the set? What time did you do it?” Daisy asked in horror.

They lived in an upscale neighborhood, and it was unseemly to root through people’s garbage.

“Tommy, hon, you just don’t do those things here. What happens when we host the next neighborhood get-together and our neighbors see that it’s Mark’s table? What will they think? How embarrassing, ugh. Que pena?”

Daisy observed Tom’s body language...disappointed and deflated. She looked into his sky-blue eyes and her Latin temper fizzled out. He meant well, naively. Daisy had to do something to diffuse the disappointment in the air that could be cut with a machete.

Tom instantly quipped, “Daisy, honey I was thinking about how you liked that little table, and we could have moonlit dinners or play scrabble, read Sunday morning papers out here, build puzzles in the evenings, things like that."

Daisy’s face began to soften, and her shoulders relaxed from a pounce position and said, “Oh hunk, how very thoughtful. You always surprise me."

Tom felt lucky, and he went on to say, “I was also thinking about when your father and brothers are here and love to play dominoes, have our little cocktails and smoke our Cuban cigars.”

The following Monday morning, Daisy called Goodwill to pick up the patio set, ordered new taupe patio furniture, ordered a company to enclose the patio, bought a huge barbecue grill, and the proudest purchase she made was a plaque which said, “NO SMOKING.”