"THE MYSTERIOUS LADY" BY TERRY BRAZIER 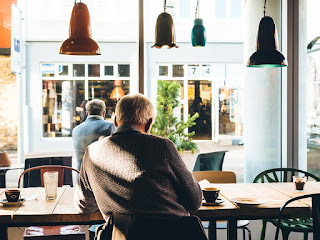 It was a brisk, cold mid-November morning, and a man was sitting at a café neighboring his hometown. The café had been open for 15 years and he had become a regular. He sat near the window, watching people walk by, and some come in.

The man's name was Les, and he had made friends with some of the other regulars and staff. Naturally, over time, some of them would leave.

A new customer who was starting to become a regular had recently caught his attention. Every time she walked up the street to the café, she had an elegant flow about her. She always wore the same color but in different tones that somehow all went together.

Being so close to the window and the room being quiet, Les could hear high heels clicking up the sidewalk. Today she strolled by the window in different shades of blue with the wind slightly blowing, which gave her a type of magical look about her.

Les turned as she walked to the counter to place her order. "I'll have a dark chocolate hazel nut cappuccino and..."

The mysterious blue woman ordered five different drinks. She thanked the barista and walked daintily across to the attached bakery. Les quickly moved himself over to a table nearby to watch her place another order.

She turned on one foot with a slight kick while holding a tray full of cookies and coffees and said, "Thank you, my dear, I'm off to deliver a bit of magic to a few clients of mine."

Les seized this opportunity of her walking to the door by jumping up and holding it open. Passing through the door, she curtsied while holding her tray.

"Thank you, sir," she said and started down the path she came in by. Les stepped out and began following her from a safe distance.

The wind picked up a little, making her pale blue cape flutter behind her. She crossed the street and headed to the nearby park. Heels clacking along the pavement, she picked up the pace while holding onto her tray of goodies.

Les knew that the woman had figured out she was being followed. A card flew out from the inside of her cape and fell to the ground. Les stopped to pick it up and was going to use the opportunity to his advantage to stop her just for a moment.

"Miss, Miss," he started to run again. The woman was running down a set of stairs at this point and into the park.

Les saw her cap vanish behind a tall bush. After Les reached where he last saw her, he caught his breath. Breathing heavily and admitting defeat, he tiredly lifted his hand and flipped the card over to read: "Madame Ladonna. Waving the wand while conducting business." Les stood still with puzzlement.


He returned the following day to the café around the same time as the day prior. Hours were spent sipping on a few coffees without a sign of the soon-to-be regular. Right before noon, the barista noticed the man staring hopelessly out the window.

"Stood up?" she asked with interest.

"No, not quite. Just in hopes of running into someone mysterious."

The doorbell went off as a customer walked in. Much to Les's disappointment, it was not the mystery lady. This would be the pattern for the next days. A full calendar week had passed without a trace of the woman.

A day past the week, he sat staring out the window. The sky was dark, and snow began to fall. Coming from the opposite direction were familiar footsteps. Turning around with excitement to just be disappointed.

Ladonna was strolling past the window with a very tall man with characters that could not be made out. Les could tell Ladonna was wearing all black and the gentleman was holding an umbrella to keep the snow off while rushing by.