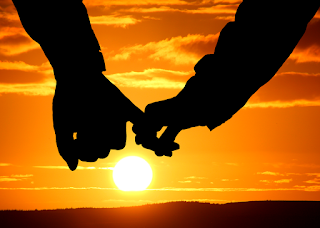 
Sarah and her longtime friend, Lisa, were finishing their monthly lunch date.

"Guess it's me and Netflix tonight," Sarah harrumphed.

Since Gary's promotion two months back, his workday extended from eight hours to nine, some days even longer. The handsome increase in salary made the strain on their personal lives tolerable.

Lisa stabbed a French fry with a fork. "How often does he work late?"

"Three days just this past week."

Lisa offered a sympathetic smile. "Things will settle down soon."

Settle down, that was what she thought, too, but the late nights were taking a toll. Sarah's shoulder's slumped.

"C'mon Sarah, you know Gary's schedule has become hectic. I'm sure he'd rather be home with you."

"You what?" Lisa prompted.

"I think there's more to Gary's late nights than work." Sarah glanced at Lisa over the rim of her glass.

If Lisa hadn't known Sarah and Gary as long as she did, Sarah's suggestive comment might have had legitimacy. However, Lisa knew Gary was deeply in love with his wife.

"Sarah, Gary loves you very much,” she narrowed her eyes at her friend. “Moreover, he’s nothing like your ex.”

Two years before meeting Gary, Sarah discovered that her ex-boyfriend was unfaithful. It devastated her, of course, but with Lisa’s emotional support and that of her family, Sarah got through it.

“Sarah, I’m certain you have nothing to worry about.”

“Maybe you’re right,” Sarah said, sipping on the last of her cola. “I have nothing to worry about.”

Installment Four
On the way home after work, Sarah thought about her three-year marriage. She and Gary were devoted to each other, they were even planning to have children. Yet, the earlier conversation with Lisa played over and over in her head.
Before long Sarah made a sudden decision to switch lanes and exit the parkway. Thirty minutes later, she pulled up in front of the building where Gary worked, bags in hand.
When she stepped off the elevator on his floor, the place was desolate and dark except for the light from an office at the end of the hall. The carpeting absorbed the clacking of her heels as she marched toward it.
Sarah paused at the door and stared at her husband. Gary was there alone, his desk laden with paperwork, his rugged features tense with concentration. Her heart did a somersault on her chest, her ribcage reverberating in response.
“Hey,” she said voice barely above a whisper.
Installment Five
Gary sprang from his chair. “Sarah, you scared me half to death!”
“Sorry” she yelped. “Didn’t you hear the elevator?”
“No. Guess I was really deep into it.” He raked his fingers through his hair. His eyes lowered, “Whatcha got there?"
“Chinese.”
“Chinese?” Gary rounded the desk and ambled toward her. “I’m starved. You read my mind.”
He reached for the package and set it on the desk behind him then broke into a wide grin. “It’s good to see you.”
“Is it?”
“Of course!” Gary laughed. “What kind of question is that?” He gathered her close.
“The kind of silly question a wife might ask herself while home alone on a Friday night,” Sarah admitted.
“Honey,” he angled his head to look her in the eye, “I’d rather be home with you than at the office any day.”
“I know” she smiled, “I just miss you.”
Gary kissed his wife until she was breathless. “And I miss you.”
Sarah nodded.
“You’re always a sight for sore eyes.”
“And so are you,” she agreed, voice choked with emotion.
“I’m glad you’re here.”
“Me too.”
Arms around his wife, Gary nuzzled her neck.
“Lisa, you were right,” Sarah said silently as a smile displayed on her lips.
From then forward Sarah vowed to keep her securities at bay. She needed to trust her husband and she also needed to trust in their strong marital bond.