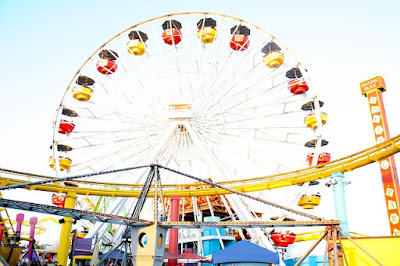 Daisy stared up at the booth and breathed in the smell of funnel cakes and excitement. She just had to win first prize. The Ferris Wheel whirred.

"Step right up, step right up. Shoot all ten ducks in a row," said the juggling carnival worker.

The crowd applauded.
Part 3
Daisy stepped up and the carnival guy continued, "Step right up, step right up. Get all ten ducks and claim your prize!"

9 ducks, 10 ducks flapped down. Ten in a row.
Part 4
The carnival crowd clapped, cheered, whistled, hooted, and applauded. The juggler juggled and said, "You get your choice of prize little lady. Here's the gigantic green gorilla."

"That leaves the last and least popular prize," the worker said scratching his head, "this old-fashioned fountain pen that no one's claimed in thirty years." He handed her a slim, shabby box.

"I know someone who will love it," Daisy said, blowing a goodbye kiss to the ducks as she hugged the box.
Part 5

The next day, Daisy and Mom visited her granddad. He sat in a chair staring out the window.

"He won't recognize you," hissed the nurse. "He hasn't said a word in weeks."

Daisy ran up to Granddad and climbed onto his chair. She slid the box she'd won open and put the pen in his hand. He looked at it for a long time.

Daisy curled up in his lap and Granddad started to sing in a quavery voice, "Daisy, Daisy, Give me your answer do!"

Daisy said, "Granddad, I went to the carnival and won that pen. Thanks for showing me how to aim."

Granddad grinned and they both rocked and sang:

"Daisy, Daisy,
Give me your answer do!
I'm half crazy,
All for the love of you!
It won't be a stylish marriage,
I can't afford a carriage.
But you'll look sweet upon the seat
Of a bicycle built for two."