With help from his life-long friend, Paul Roberts, a renowned scientist, Nick Christopher travels back in time to the years before his birth, so he can talk to his mother and change her future.

Nick's father had died suddenly before Nick was born, but the trauma of his death had done "little to cool his mother's feelings and sometimes bitter resentment about him as a husband."

But just as Nick discovers a way to go back in time, so do forces who have their own dark agenda for changing the past to fit their image of the future. So, what happens when Nick runs into these mysterious, unidentified agents?

Nick’s mission is to change the course of his family, but is he trying to play God in the process? Check out the video for the book, Nick Christopher: Time Traveler.

Nick Christopher: Time Traveler is the first fiction novel by Dr. Gregory Shafer, an English professor whose nonfiction textbooks include Process & Voice in the Writing Workshop, and Propaganda—American Style: A Textbook for Critical Thinkers (Click on the titles to read our blog posts each book).

Although Nick’s mission is to change the course of his family, the scientist is eventually recruited to change major events in history, such as preventing the assassination of U.S. President William McKinley. Along the way, Nick meets time travelers like himself, one of whom faced the dilemma of deciding whether to save John Kennedy and Malcolm X.

Shafer, a Michigan resident, also places Nick Christopher in certain tragic events that Michigan natives recall, including a much-publicized murder investigation in which Nick becomes a suspect. Most importantly, when the Time Traveler discovers the truth about his parents, Nick must decide what to do. Should he protect his mother or save his father?

Nick also faces the question of whether he can actually do anything to change the past, particularly in light of the dark agents he encounters who want to “control not only what happens but what needs to happen.”

In Nick Christopher: Time Traveler, Shafer cleverly interweaves a fictional story with events that are permanently etched in U.S. history. The suggested motives and conspiracies behind these historical events might prompt readers to take another look at the past from a different perspective. 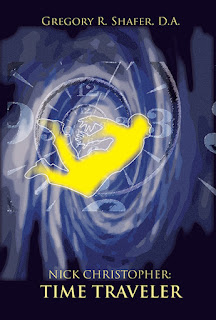